Supergiant Games' follow up title to Bastion takes you on a journey through Cloudbank, a fictional city that looks incredibly beautiful. The turn based combat and exceptional soundtrack will make you fall in love with this game...read more

Fallout, one of the most beloved franchises in the video game world, has made its debut on iOS - and what a debut it is! If you've always fantasized about how to build the perfect vault to defy even the worst catastrophes, this is the right game for you...read more

Titan Quest is a hack ‘n’ slash game that was originally released for PCs in 2006. Its gameplay is similar to Diablo, but the game takes place in the ancient world (Greece, Egypt, Asia). Titan Quest was well received by critics and gamers alike, so I hope that the current developer DotEmu, who is responsible for the iOS port, manages to translate the classic keyboard and mouse controls to intuitive touchscreen controls. If that’s the case, then we’re all in for a real treat!

Like I mentioned, Titan Quest is a classic hack ‘n’ slash game at heart, therefore you can expect light role-playing elements, item hunting, character customization and slashing through hordes of enemies. Playing the game you will be thinking to yourself “I’ll clear just one more dungeon” and before you know it, another two hours have passed. The developers are currently aiming to release the game late this year and it will cost less than 10$ – not bad for a game that was released as a full price title back in 2006!

If you are into games in general, then there’s absolutely no way you haven’t yet heard about Bastion, Supergiant Games’ debut title that was originally released on Microsoft’s Xbox 360 as an Xbox Live Arcade title. Bastion featured a really unique way of narrating the player’s actions throughout the whole game and offered an equally unique and beautiful art direction. No wonder the game became a huge success, was ported to nearly any and all platforms available (including iOS – you can find it on the App Store) and developed quite the fan base.

Why am I telling you all this? Because Transistor is Supergiant Games’ follow up title and many players had high hopes for this game. Did Transistor manage to meet all of these expactations? Well yes and no. Yes, because the game features yet again an incredible art direction, superb (and I really do mean superb!) soundtrack and a great narrative. However, its gameplay can’t really be compared to Bastion’s and some players didn’t quite like that. Personally, I think Transistor’s turn based combat is more nuanced than what Bastion had to offer and, most importantly now that the games is available on iOS, is more suited to touchscreen inputs. Additionally, I really like the fact that Supergiant Games tried to evelop something new and unique, rather than simply copying Bastion’s formula to success.

If you like games with a unique art style and an incredible soundtrack (just listen while you watch the trailer) – check out Transistor, it might be one of the best games available on the App Store right now.

Fallout Shelter: Get Your Fallout Fix On iPhone and iPad

During E3, Betehsda has not only announced Fallout 4 but also used the occasion to release Fallout Shelter, an iOS game focused on building your ideal underground vault. It’s a competitive genre in the App Store, but none of the other games are as atmospheric as Fallout Shelter (even though Tiny Death Star isn’t too shabby either). If you are a fan of the Fallout universe and you’re the proud owner of an iPhone or iPad, then you absolutely have to try this game out. The fact that it’s available for free makes this decision even easier. And compared to other town-bulding games, the free2play elements aren’t that bad here – you can progress quite a bit without having to spend any of your hard earned cash. Enjoy building your vault!

It’s-a-me, Mario! Nintendo Games Are Heading To The App Store 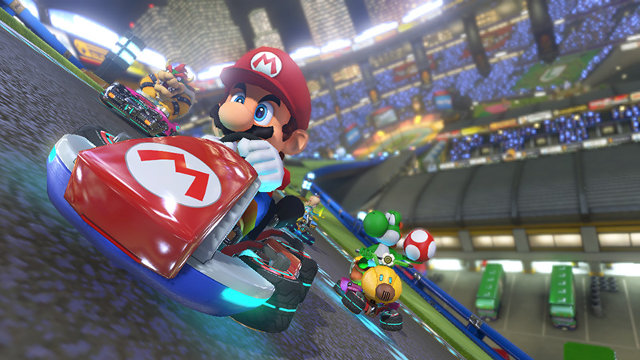 Color me surprised: Nintendo will enter the mobile market in 2015! A partnership with DeNA has been officially announced during a special press conference. If you’ve ever dreamed about playing Mario, Zelda, Donkey Kong and the likes on your iPhone and iPad, now is the time to rejoice! Unfortunately, it is not quite clear what IPs will hit the App Store and what kind of gameplay we can expect from these games. But if Nintendo does one thing right, it’s fun, addictive and polished gameplay – therfore, I’m rather confident that we’ll see some great games being published that are going to be a great addition to any gaming collection. If you ask me, the turn based Pokemon games would be great fun to play on iOS devices. Let’s wait and see what Nintendo will announce in the near future. But whatever it is, please let it be full fledged “core-experiences” (for lack of a better word). Fingers crossed.

Gemini Rue is one of my absolute favorite adventure games on iOS. If you’re old enough, it will remind you of the classic LucasArts games from the ’90s, like Indiana Jones and the Fate of Atlantis or Day of the Tentacle. Oh what great games (and times) those were! And if you’re a fan of games with a gripping story and a dense atmosphere, look no further: Gemini Rue has a real Blade Runner vibe going on. The story offers quite a bit of mystery and room for speculation, you will always be guessing how the characters are related to each other and what might happen next. The difficulty is great, it’s demanding but doesn’t feel unfair and (for the most part) the puzzles are solvable by using your mind rather than trial and error. Like I said: I really like this game. If you’re a fan of old-school point-and-click adventures, you owe it to yourself to get Gemini Rue for your iPhone or iPad.