It is great to see more and more of the traditional pc and console developers releasing quality titles on the App Store. In Rage‘s case the developer is id Software, a big name for pc gamers – especially when it comes to shooters with Doom, Quake and Wolfenstein being one of id’s most loved titles. Rage for iPhone and iPad is a rail-shooter based on id’s brand new id Tech 5 megatexture engine. And while it looks beautiful, it’s a great deal of fun!

Rage does one thing and does it well: Straightforward, in your face action. Your only objective is to shoot everything that moves(and some stationary targets) as ammunition efficient and fast as possible and to collect some goodies while doing so. That’s it. But it is executed to perfection. You can really feel id’s shooter expertise in Rage. 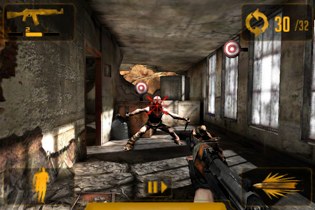 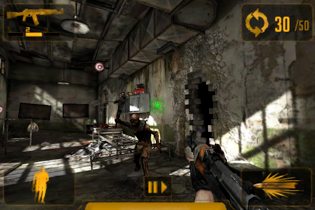 If you are familiar with rail-shooters, you already know what to expect. Your character moves automatically through the levels while you shoot everything that get’s in your way. In Rage you have the choice to do this with either a shotgun, or a machine gun. You will have to pick up the ammo packs placed in the levels to stick with these weapons. If you fail to do so you will have to use the back-up pistol that comes with unlimited ammo, but doesn’t do as much damage of course. You can also increase damage with perfect reloads: When you reload, you have an exact time window to hit reload again to double-up the damage. Such a reload system is also a feature in the Gears of War series(and I loved it – remember the lore ride on insane difficulty?).

Besides the ammo packs there are also money bags waiting for you to be picked up to boost your highscore. You can also boost your highscore by headshots and by shooting stationary targets. Since headshots save you a lot of ammunition and reloading, they come in really handy in the higher difficulties. Rage comes with 3 levels and each of the 3 has a version “II” that wants to be unlocked. 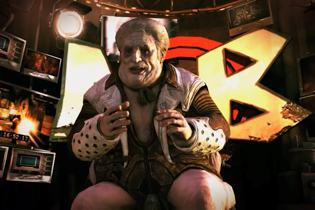 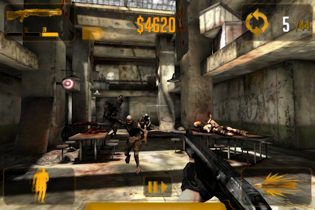 The controls in Rage are great. You have 4 options: Tilt control, touchpad control, gyroscope control and virtual window. Virtual window basically puts you into the game with 360 degrees of movement freedom. While that sounds great, I felt it involved too much physical movement. You will definitely be an attraction if you pull that off in public. Great thing is, all the control methods work great, so it really comes down to personal preference in this case.

The presentation is stunning. From graphics to animations to audio and even the menu design – it’s a gorgeous game. While Rage is a universal app, there is an HD version available that comes with greater texture resolution. Needless to say that if your iDevice can handle the HD version that’s the one I would go for.

Rage is a total recommendation to anyone who even remotely enjoys straightforward action games.