Posted on May 31, 2011 by Tom in Action, Featured Reviews, iPad Games, iPhone Games

Demolition Dash is a running/platforming game developed by Germany based studio Dreamfab, that offers a great presentation and high level of polish. I already had plenty of fun with a preview build of Demolition Dash a few weeks ago, and with the final release featuring some significant performance improvements, the whole thing just got even better.

Zilla (who you will be in control of) just awoke after 100.000.000 years of sleep. Now that’s a long time, so who can blame him for wanting some action? And that’s were you come in. Your task is to safely guide Zilla through 8 major cities all over the world, while he happily destroys everything that gets in his way. 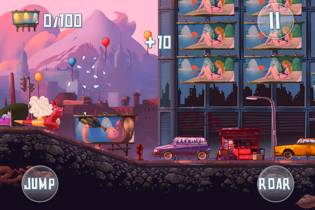 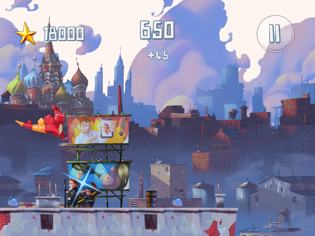 Unlike other games in this genre, Demolition Dash does not feature an get-as-far-as-possible endless mode (although one will be added with a future update), but predesigned levels that you’ll need to make it through alive from start to finish. There are eight cities with three levels each that you’ll unlock bit by bit. The difficulty ramps up nicely with every level you advance to keep the game challenging without making it frustrating.

As in every running game, everything comes down to timing. You’ll need to make sure Zilla doesn’t fall into any of the countless gaps by jumping over them and that he doesn’t run into the police by either avoiding them or roaring them off their feet. Tapping the left side of the screen will make Zilla jump, tapping the ride side will make him roar. Roaring will also destroy stuff like billboard ads and cars to get you some tasty bonus points. To make sure you can’t just run around roaring all the time, it needs a little bit of time to reload.

As I already mentioned at the beginning, Demolition Dash looks and sounds great. Dreamfab has made sure there’s a ton of things happening all over the screen and has put a lot of attention to all the little details. There’s exploding cars, parallax scrolling, a new art style for each of the eight cities and a soundtrack that also changes depending on the city you’re in. If I had to point out something that could be improved, I can only think of the performance. While it’s already been improved compared to the preview version, it still feels like it could use a few more fps to do the insane amount of stuff happening on the screen justice.

All in all, Demolition Dash is an entertaining platforming/running game with great visuals, challenging but fun gameplay and a great level of polish. The fact that there’s an endless mode coming in a future update should add some more replay value to keep you coming back for more. Demolition Dash is available for iPhone[$0.99] and iPad[$1.99].