Kosmo Spin is the first game of developer Simogo, the swedish team who just recently brought us the great Bumpy Road. And much like Bumpy Road, Kosmo Spin also focuses on a unique way of controlling the game.

In Kosmo Spin, you’re asked to defend a planet from a breakfast stealing, ball shooting UFO. And as the name suggests, you will do so by spinning the planet that your little guy with the square head is standing on. The square head comes in handy to defend the planet by bouncing all sorts of balls back into space. If a ball hits the planet, the impact will make it impossible to spin it for a few moments, thus rendering you defenseless against the alien’s beam laser. That beam laser is also the only thing you’ll have to fear in Kosmo Spin. If the alien catches you, it’s game over.

That makes it important to bounce back as many of the balls as possible, so you’re always able to escape the beam laser. The balls come in different sizes and with unique attributes. Some are faster than the others, some require you to bounce them more than once to get rid of them, and some are shot in a different angle, making it harder to get to the right spot.

Besides an endless modes where the UFO gradually gets faster and faster, there’s also a quest mode. In this mode, Simogo has prepared special tasks for you, like surviving for 10 seconds while the UFO is ridiculously fast or to not let the UFO beam up any food for 10 seconds. The tasks range from very easy to very hard and come in great variety. 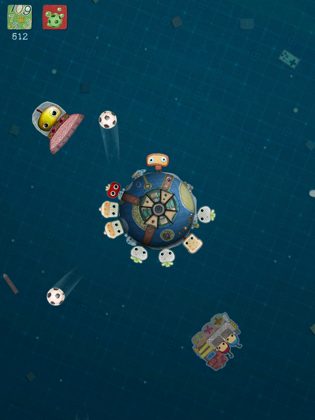 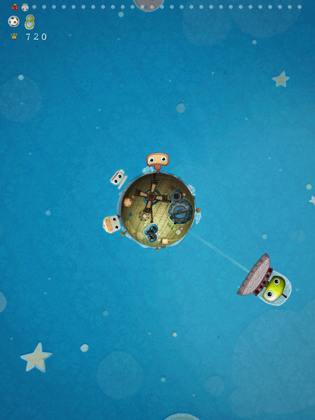 If you’re looking for a polished casual game that’s very easy to get into, then Kosmo Spin should catch your attention. It comes as universal app for as little as $0.99.