Gears Review – A Fantastic Ball Roller For iPhone And iPad

This game is intense! Never before did I have that much fun with a ball rolling game. There’s quite a few things that are special about Gears, starting with the developer. Who would have thought that Crescent Moon Games, the RPG specialists behind Aralon and Ravensword would release a ball rolling game? But they did, and they did a heck of a job!

Gears does a lot of things right: It looks great, the controls are as precise as you’d want them to be in such a game and it’s just plain fun rolling that ball through the levels. Mostly because of the terrific level design – Crescent Moon has clearly put a lot of effort into it. Each level feels unique and comes with new challenges. What’s really clever is the use of all 3 dimensions in Gears. Not only will you have to “roll” down some stairs, or drop from one platform to another, but also use special platforms to jump over gaps – all of this while the ground itself is moving most of the times. 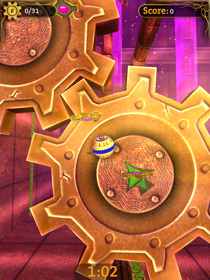 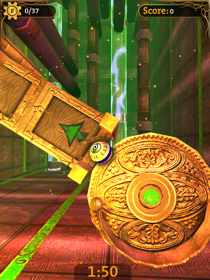 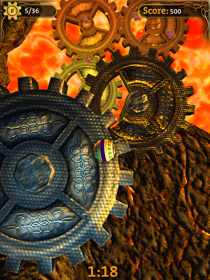 Gears gives you the option to chose between touch and tilt controls. And although there is a nice visual effect to the tilt controls, they are not nearly as precise and responsive as the touch controls. I think it’s almost impossible to get through the levels later on in the game with tilt controls. Touch controls on the other hand work great and offer the precision that’s necessary to finish the levels on time. Each level comes with a time limit that depends on the difficulty you have chosen. This means you have unlimited lives and if you ‘die’ you can immediately continue from one of the many checkpoints. However, once the time is up, you will have to start all over again.

A bit of a warning at this point : The game gets pretty hard after the first few levels. Like, really hard. Even on normal difficulty it took me countless attempts to finish some of the levels within the time limit. Somehow Gears also comes with a story that explains why you are rolling through all the levels. It’s pretty generic and doesn’t add a lot to the game. But hey – it’s a ball rolling game, who plays games like this for the story?!