Posted on May 19, 2011 by Tom in Action, Featured Reviews, iPad Games, iPhone Games

We have been featuring Bumpy Road for quite some time now, and the reason is rather simple: It’s a great game that perfectly demonstrates how to utilize the touchscreen interface on iPhone and iPad to create a unique and fun gameplay mechanic. Oh, and it also looks and sounds great. Sounds good?

So lets talk about the controls. In Bumpy Road, you guide the car of an elderly couple. But you wont be doing this with any on-screen buttons. Nope, in Bumpy Road you control the ground. Wherever you touch the road, it will lift up, creating a bump that you have to use to create momentum for the car. Creating a bump left of the car will make it go right and vice versa, touching the road right underneath the car will make it jump. The mechanics of this control scheme are implemented perfectly and work like a charm. However, as easy as it might sound, you’ll actually need to spend some time practicing until you get the hang of it. 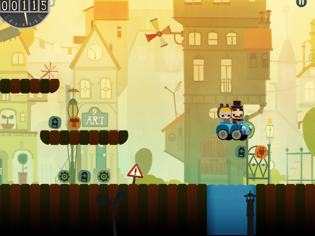 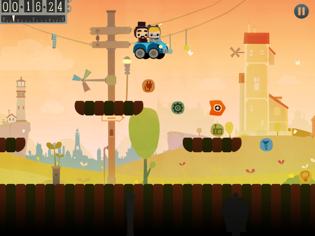 Bumpy Road comes with 2 modes. The first one, Evergreen Ride, is an endless mode where you’ll be trying to get the couple as far as possible without falling into the numerous gaps or running out of gas. In order to get going you’ll need to collect little gizmos that are everywhere along the way to fill up your fuel gauge. Once the fuel gauge is completely filled up, the game will go black-and-white and speeds up for short period of time. The second mode is called Sunday Trip and is all about getting the couple as fast as possible from start to finish. On top of the normal gizmos you’ll also find some that will speed up the car, making it crucial to catch as many of them as possible. There are no gaps in this mode, so it’s a great choice if you need some more practice with the controls. 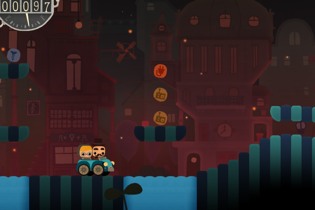 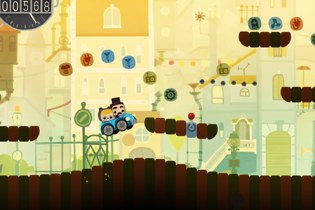 Every inch of Bumpy Road feels incredibly polished. From the menus to the art style and the music: Simogo has put a lot of attention to detail and made sure that Bumpy Road is a flawless experience. It really is a very charming game. The fact that you can collect memories of the couples while playing that, bit by bit, unlock their romantic story only emphasizes this point. The only criticism that I can think of is a lack of variety. But since the whole point of the game is the control scheme it’s build on, that’s a minor complaint.

Bumpy Road is out now on the App Store as universal app for $2.99.