League of Evil Review – The iPhone Challenge You Were Looking For

League of Evil is a challenging platformer that comes in a charming 8-bit retro look. A lot of people have compared it to the not so long ago released Super Meat Boy that was a great success. And the similarities are definitely there. However, while both games will become very challenging after a while, League of Evils difficulty does not reach Super Meat Boys insanity. 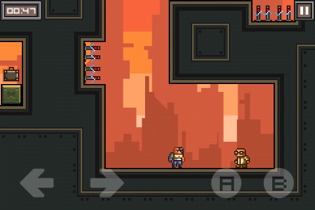 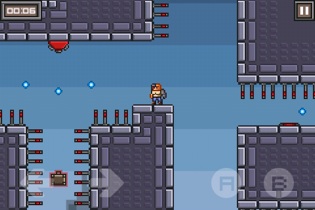 The gameplay boils down to: Starting at point A and getting to point B without touching anything harmful. As usual, this sounds very simple, but the developer knows how to make you struggle more and more along the way. The controls are slick and very responsive. It comes with 4 on screen buttons: Left/right, jump and hit. You can perform double jumps, wall jumps and slowly slide down the walls. Some of the obstacles in your way can be destroyed by punching them, like patrolling soldiers, while others are indestructible and you have to carefully plan your way around them. One very important point for such a game: When you die, loading times are nearly non-existent, you can retry immediately. Since dying will happen not only occasionally, this is very important. 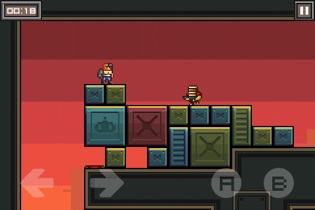 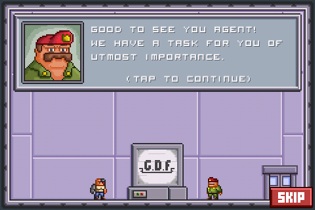 League of Evil comes with 102 levels divided into 3 scenarios: ‘Weapon of Mass Destruction’, ‘The Blocks Cometh!’ that features the looks of the game it is named after developed by Halfbot and ‘The Impossible Missions’ – the name pretty much speaks for itself with the difficulty being ramped up quite a bit in the 18 levels this scenario comes with. You can find Briefcases that function as bonus points in all of the 102 levels. They are placed in pretty tricky spots and you will definitely come across some that you will have to try over and over again until you finally collect them. The game will also gather statistical data like ‘Player Deaths’, ‘Enemies Defeated’ and ‘Average Level Time’. That’s some nice infotainment that I enjoyed looking at every now and then.

League of Evil will set you back $1,99 but it is well worth it if you enjoy the occasional platformer fix and a healthy challenge on your iPhone, iPod or iPad. If you are not sure yet, don’t hesitate to give the free lite version a try.