When Rockstar announced that Grand Theft Auto: Chinatown Wars will be released on the App Store this was big news. One of the studios with the best reputation amongst hardcore gamers was about to release a game of their best selling and best rated series for the iOS platform. This felt like a game changer.

GTA: CTW was originally released on Nintendo’s DS in 2009 (with a PSP port later that year) and since the DS uses a touchscreen as an additional input method next to its traditional d-pad and buttons, GTA: CTW was optimized for a touch interface from the very beginning of its development. 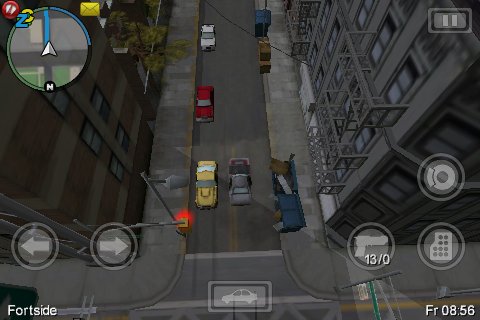 That is also why a lot of people had been hoping for this port long before it was announced – the iPhone was technically more than capable of handling this game and the similarity of the input methods of the DS and iPhone were pretty obvious.

But enough about the background, lets talk about the game itself. And what shall I say: Everything that you expect from a GTA game is there – the story, the cutscenes, the radio stations, the gameplay, Liberty City – this is the real deal right in your pocket. 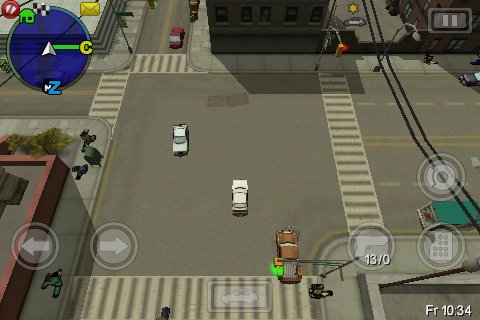 The game looks and feels great. Rockstar has made a great effort in getting all the details just right, there is something to discover everywhere. Liberty City is loaded with people and cars. You will see tourists in the streets taking pictures, if you run over a fire hydrant you will unleash a water fountain, cars are using their blinkers if they make a turn, traffic lights are directing the cars, you will see some nice weather effects and a day/night system – Liberty City feels like it is alive. From a technical point of view the graphics are actually quite dated, but Rockstar has put all the pieces together so well that this barely matters.

This is especially true in combination with the sound and music. The radio stations have always been a trademark of the GTA series and the guys at Rockstar really have a hand in picking great and catchy tracks. So once again chances are good that you will find yourself aimlessly driving around the city listening to this one radio station that your into. 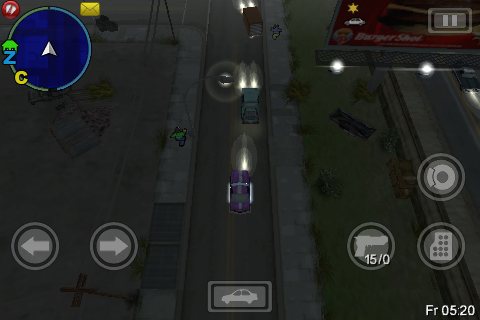 But there is a lot to do even in between story missions. You can compete in races, earn money as a taxi driver or try yourself in buying and selling ‘goods’, just to name a few of the possible activities. But don’t worry, thanks to your in-game PDA you will never be lost or wondering where to go next. You will get e-mails to let you know about new missions and the built in GPS system will lead the way. The interface and menus are quite complex, but new features are introduced one at a time so you have time getting used to it. Everything is still on a manageable level but it doesn’t feel as intuitive as it could be.

The story is good old GTA material – with a Chinese touch as the title obviously implies. You are playing as Huang Lee, who’s father just got murdered in Liberty City. His father also happened to be a Triad boss, so when Huang Lee is coming to Liberty City to hand over a sword to his his uncle Kenny, he will find himself involved in all sorts of criminal activities rather sooner than later. It’s the GTA we all know and love.

The controls work great on the iPhone. On foot you will be controlling Huang Lee with a virtual analog stick that is replaced by right/left buttons once you enter a car. Driving around Liberty City is fun and intuitive, thanks to the build in steering assistant. This neat assistant helps keeping your car going into the direction the street is going. This feels a bit awkward at first but needs just very little time getting used to. And once you adapt to it, you don’t want to miss it anymore. It makes driving just so much easier. However, if you do like to be in full control and you’re up for the challenge, you can always turn the assistant off in the options. You can also chose to keep the virtual analog stick while driving, but to me the left/right buttons felt more precise and natural.

However, one thing you might be struggling with is the aiming assistant. The game automatically picks a target and you can’t really influence which one. So if there are 3 enemies next to each other the assistant sometimes happily switches between these targets rather than finishing one off after another – which is of course not the most efficient way. When you are trying to strafe or walk backwards it also happens sometimes that you lose the target and suddenly are shooting into the complete opposite direction. Yes, this is annoying. But most of the time it works as it should and I would never consider this to be a deal breaker. 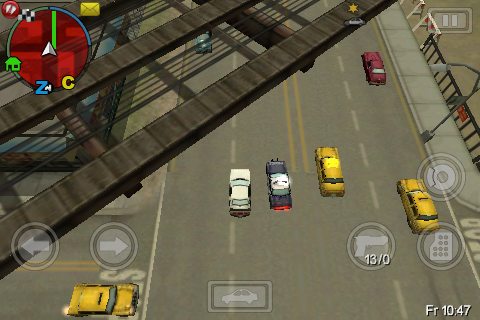 Grand Theft Auto: Chinatown Wars has pushed the limits of iPhone and iPod gaming. Its incredible depth is outstanding on the iOS platform. You can get it for $9,99 on the App Store, which is more than reasonable for a game like this (especially compared to what you had to pay for it on the DS/PSP). If you didn’t buy it yet, you should give the free lite version a try, I’m sure you wont regret it.