Death Rally is a top-down action-racer developed by Remedy, the guys behind Alan Wake and Max Payne. It’s actually a remake, the original Death Rally was released in 1996. So don’t expect any kind of realistic driving simulation, everything in this game is tailored to deliver instant action. And it’s a blast from start to finish.

At the start of your career there is only one car available and it’s equipped with a standard machine gun. But this will change pretty soon. There are 4 more cars and additional weapons that are unlocked by collecting all of their parts that are spread over the race tracks. As you start racing you will also earn money to upgrade your car’s attributes (speed, handling, armor) and your weapons. And since you’re not the only one taking advantage of these weapons, you will also need to spend some money on repairing your car after each race. Depending on the ‘Armor’ attribute, you can only take so many hits before your car explodes, forcing you to quit the race. This applies to your rivals as well – which gives you the choice to either drive as precise as possible to lead the race or to fall back and blow up the competition. I guess I don’t have to tell you what’s more fun. 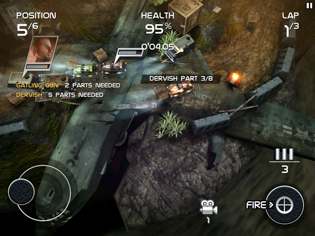 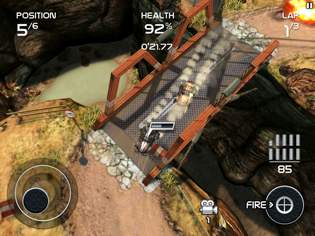 While it basically comes down to racing in one event after another, there are always 6 events available to chose from. This clever design choice almost always ensures you can pick a mode or track that you like to race on. There are 5 Tracks available, each with its distinguish look. This might not sound like a lot, but Death Rally reuses each of them in reversed and rotated versions which adds quite a bit of variety. And on top of that, Remedy promised to add more content with regular updates. The first of these updates is right around the corner and will bring a new car, 2 new weapons, a new challenge mode and other minor improvements and bug fixes. 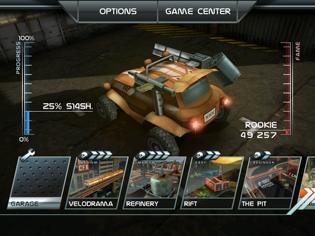 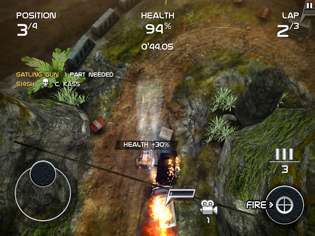 The presentation of Death Rally is stunning, with sharp visuals that will light up your screen with all sorts of gunfire and explosions. If you’re the proud owner of an iPad 2, the visuals are ramped up even further to fully take advantage of Apple’s new hardware. What also stands out is the level of polish that went into this game. Even the menus look slick and are clever designed. You control your car with a virtual analog stick on the left and a fire button on the right. Controlling the car with the analog stick might need some time getting used to, but after only 2 or 3 races I was getting along very well with it.

If you like the genre, you should definitely pick Death Rally up. $3.99 is a fair price for the package Remedy offers here. And if you have both an iPhone and iPad you will be happy to hear that it comes as a universal app.