Posted on May 12, 2011 by Tom in Action, iPad Games, iPhone Games, Platform, Preview

Thanks to the fine folks at dreamfab we got the chance to play a preview build of Demolition Dash. It’s a Canabalt style running/platforming game with a few additional gameplay elements. You’ll be in control of Zilla who just awoke after 100.000.000 years and now wants to “play”. Well “play” in this case means to go stomping through the biggest cities around the world and destroy everything that get’s in Zillas way (and yes, that includes Tokyo).

When I was watching the trailer for the first time, what immediately stood out to me was Demolition Dash’s art style. The game just looks great. The attention to detail is insane and there’s stuff happening everywhere. There’s also some parallax scrolling going on in the background that’s different for every city. But not only that, dreamfab also made sure that the good looks are accompanied by some great music. It’s basically one catchy track that get’s a different touch depending on the country you’re in (it actually reminded me of how it was done in Banjo Kazooie – man that music was awesome). 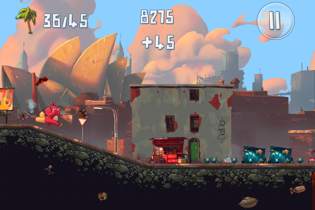 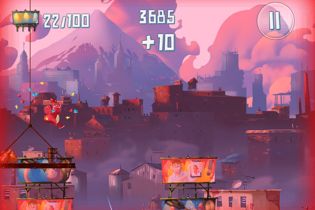 Demolition Dash is also a good deal of fun. The gameplay mechanics are easy to learn and the increasing difficulty in the level design will keep you busy. Zilla will lose one of his three health points by either falling down a gap or running into the police. You have the options to avoid the police by jumping over them or to simply blow them away with Zilla’s roar. Check out the announcement trailer to see the game in action. All in all this game is shaping up nicely and something you can definitely look forward to if this is your type of game. If everything goes well, Demolition Dash should be available later this month for iPhone[$0.99] and iPad[HD $1.99].