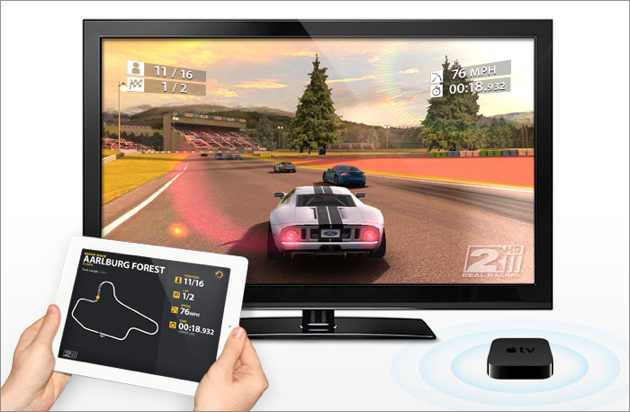 Firement has always been very fast when it came to implementing new iOS features into their games. So it’s not a big surprise that the studio just announced that Real Racing 2 HD will be the first game to support wireless full screen gaming over AirPlay. Before you celebrate the new feature, be aware that you will have to wait for iOS 5 to arrive this fall and you’ll also need to have an Apple TV for it to work. However, if you don’t mind having an HDMI cable connected to your iPad, you can already take advantage of 1080p output with Real Racing 2 HD.

If you look a bit closer at this announcement, you’ll realize that this new feature is huge! The special thing about it is that Firemint is not just mirroring the iPad’s display on your TV – they are adapting the games resolution to fit your big screen and are using the display on your iPad to show additional telemetry data in real time. If you have a feeling that this sounds somehow very familiar, then you’ve probably watched Nintendo announce their new gaming system, the Wii U. What Nintendo just introduced as a revolutionary new way of console gaming, is almost exactly what you get here from Apple. According to a rumor some time ago, Nintendo’s CEO Satoru Iwata surprisingly declared Apple as “the enemy of the future,” not Sony. Well, now it’s pretty clear what he was talking about.