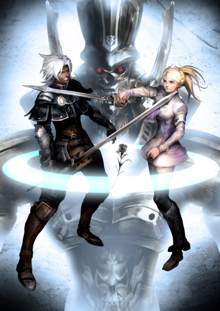 Andriasang.com reports that according to the Japanese gaming magazine Famitsu, Square Enix is working on 2 new Chaos Rings titles for iPhone and iPad. The first title, called Chaos Rings Omega, is most likely going to be a prequel to the original Chaos Rings and will be released this May – in Japan. Square Enix has yet to announce a worldwide release date.

On top of that, Square Enix has bought some advertising space within the magazine to tease Chaos Rings II. Unfortunately, that’s already all there is. But it’s plenty to get me excited! Chaos Rings was an RPG exclusively developed for iOS and is one of the best RPGs available in the App Store. Let’s hope it wont take long until Chaos Rings Omega is available outside Japan – and until we get some details on its sequel, Chaos Rings II.