Bungie Studios, the dudes that gave birth to the Halo universe, have started a new side project called Bungie Aerospace. With Bungie Aerospace, they want to help small developers to successfully launch their mobile and social games. And now we know what the first game is going to be: Crimson: Steam Pirates, a “turn-based action strategy game where you’ll guide your pirate fleet into battles on, above, and below the waters of the Caribbean.”

Crimson: Steam Pirates will be released for the iPad on September 1st as a freemium title. You can download the game for free and play through its first chapter that consists of 8 missions to get a hang of the game. And then, in case you like what you just played, buy Chapter 2, “Tales of Captain Blood”, for $1.99. Check out the games’ official site to get some more details. 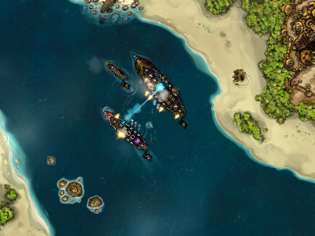