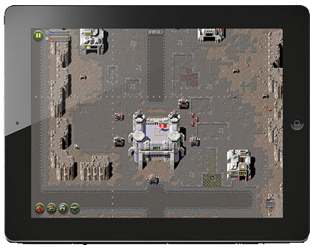 We have already talked about the revival of Bitmap Brother’s famous RTS Z a few weeks ago, and now we finally have some new details and a release window.

Currently, Kavcom is adding the final bits to Z and stated that they’re aiming for a May release – that means within the next 3 weeks. Unfortunately, they came across a few hiccups related to the iPad 2, that might push the release a bit back.

[Update, 03.06.2011: Since it's already June and Z is not yet in sight, we wondered what happened. Turns out that during the QA process Kavcom noticed a few minor gameplay issues. The developers ask for some more patience, they "have spent a long time developing this version which looks awesome" and want to make sure the experience is as polished as possible. To me this sounds like they really care to release a game that's worthy of the original. And if they need a bit more time to do that, then that's a far better approach than what we've seen far too often: Releasing an unfinished product and patching it later. Kudos to Kavcom, although I hope it wont take too long to polish everything up.]

And as if that’s not good enough, here are some more details: